System integration (SI) is an IT or engineering process or phase concerned with joining different subsystems or components as one large system. It ensures that each integrated subsystem functions as required. 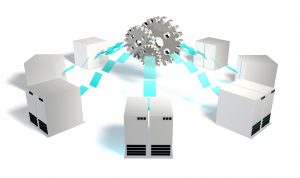 a company can align cheaper, pre-configured components and off-the-shelf software to meet key business goals, as opposed to more expensive, customized implementations that may require original programming or manufacture of unique components. Creation of these information systems may include designing or building a customized architecture or application, integrating it with new or existing hardware, packaged and custom software, and communications infrastructure. Some systems integrators working in specialized areas, like SAP installations or upgrades, may offer more customization for specific applications.

Systems integration has traditionally been a crucial specialty in the defense contracting industry. Proprietary, closed systems needs to be upgraded or, as is often the case, legacy hardware or software must be preserved within modern computing networks, graphical user interfaces (GUIs) or hardware connection standards.

Vertical integration (as opposed to “horizontal integration”) is the process of integrating subsystems according to their functionality by creating functional entities also referred to as silos. The benefit of this method is that the integration is performed quickly and involves only the necessary vendors, therefore, this method is cheaper in the short term. On the other hand, cost-of-ownership can be substantially higher than seen in other methods, since in case of new or enhanced functionality, the only possible way to implement (scale the system) would be by implementing another silo. Reusing subsystems to create another functionality is not possible.

Star integration, also known as spaghetti integration, is a process of systems integration where each system is interconnected to each of the remaining subsystems. When observed from the perspective of the subsystem which is being integrated, the connections are reminiscent of a star, but when the overall diagram of the system is presented, the connections look like spaghetti, hence the name of this method. The cost varies because of the interfaces that subsystems are exporting. In a case where the subsystems are exporting heterogeneous or proprietary interfaces, the integration cost can substantially rise. Time and costs needed to integrate the systems increase exponentially when adding additional subsystems. From the feature perspective, this method often seems preferable, due to the extreme flexibility of the reuse of functionality. 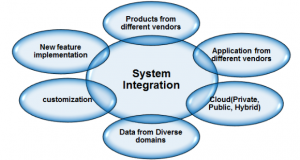 Horizontal integration or Enterprise Service Bus (ESB) is an integration method in which a specialized subsystem is dedicated to communication between other subsystems. This allows cutting the number of connections (interfaces) to only one per subsystem which will connect directly to the ESB. The ESB is capable of translating the interface into another interface. This allows cutting the costs of integration and provides extreme flexibility. With systems integrated using this method, it is possible to completely replace one subsystem with another subsystem which provides similar functionality but exports different interfaces, all this completely transparent for the rest of the subsystems. The only action required is to implement the new interface between the ESB and the new subsystem.