Telecommunications, also known as telecom, is the exchange of information over significant distances by electronic means and refers to all types of voice, data and video transmission. This is a broad term that includes a wide range of information transmitting technologies such as telephones (wired and wireless), microwave communications, fiber optics, satellites, radio and television broadcasting, the internet and telegraphs. 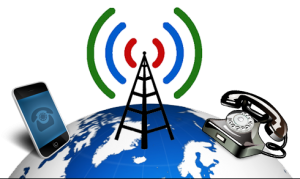 A complete, single telecommunications circuit consists of two stations, each equipped with a transmitter and a receiver. The transmitter and receiver at any station may be combined into a single device called a transceiver. The medium of signal transmission can be via electrical wire or cable (also known as “copper”), optical fiber, electromagnetic fields or light. The free space transmission and reception of data by means of electromagnetic fields is called wireless communications.

The word telecommunications comes from the Greek prefix tele, which means distant, combined with the Latin word communicare, which means to share.